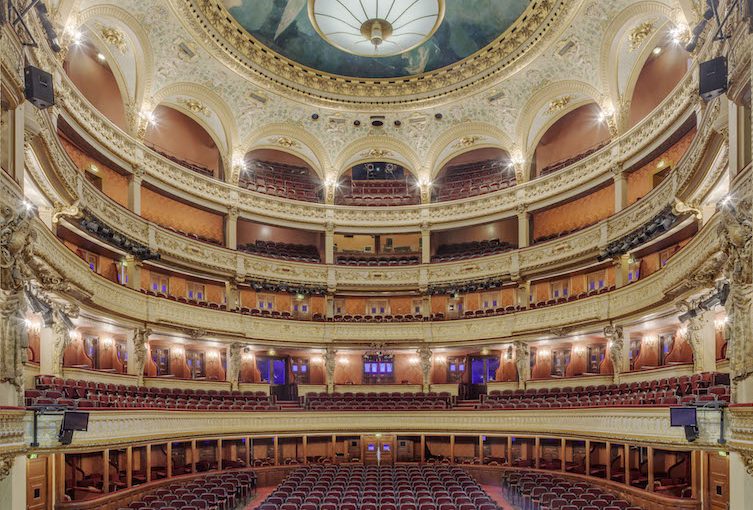 Opera returns at last to this historical Parisian opera company. On February 12, the Opéra Comique presents Fantasio by Offenbach, the first new production of its (re)opening season, and after two years of intense renovations, the reopening of its historical venue, the Salle Favart, will be on April 26 with Alcione by Marin Marais.

The first title of the season is Offenbach’s long-neglected Fantasio, which comes to the Théâtre du Châtelet, with staging by Thomas Jolly, and featuring mezzo-soprano Maria Crebassa and baritone Jean-Sébastien Bou. Jolly and music director Laurent Campellone have reconstructed the score, offering audiences the special opportunity to discover this opéra-comique, closely based on the play of the same name by French author Alfred de Musset.

Visuals of the Season 2017 @ Opéra Comique

Marais’ Alcyone will be the first opera on the renovated Opéra Comique theatre with magical staging by Louise Moaty bringing together theatrical machinery, the rigging of ships, and the circus arts. World-famous conductor and instrumentalist Jordi Savall is one of the greatest promoters of Marais’ work and of Baroque music in general. Under his baton this story of lovers confronting the Gods’ power and wrath will surely find new resonance for contemporary audiences.

Further titles in the 2017 season will include Le timbre d’argent by Camille Saint-Saëns in June, Miranda from September to October, Kein Licht by Philippe Manoury at the end of October, Mozart’s The Magic Flute in November, and finally the delightful Le compte Ory by Rossini will close the opening season in December.

The Opéra Comique has already undergone several renovation efforts and modernization campaigns during off-seasons in order to keep up with operatic activities. The final phase of works in progress – ventilation and implementation of safety standards in the auditorium– this has required the complete closure of the theater since July 2015.

The extensive program of restoration of the Salle Favart required 13 companies and 16 trades to refurbish the decorations, restore hangings from historical data, floorings, doors and seats, clean and refurbish the chandeliers and wall lights and restore the light ring.

Founded in 1714 under the reign of Louis XIV, the Opéra Comique is one of the oldest French dramatic musical institutions along with the Opéra de Paris and the Comédie-Française. With a history that was alternately both turbulent and prestigious, the Opéra Comique was added to the register of national theaters in 2005, and in 2015 celebrated its tricentennial.

Opéra comique as a genre is represented by the Opéra Comique company. The term “comique” does not mean that laughter is compulsory. Rather, sung lines are interspersed with spoken drama. Opéra comique stands in contrast with opera, which is sung throughout.