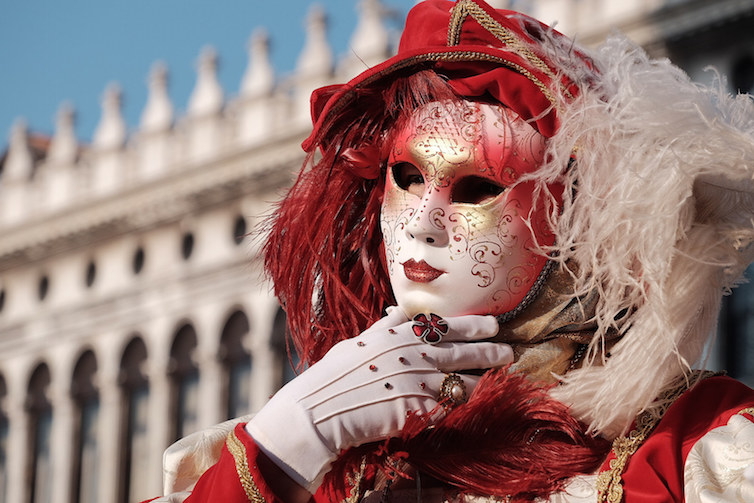 As February slowly fades away, step out from the winter blues and into the magic of the Venice Carnival. The Carnival — il Carnevale di Venezia — fills the beautiful “floating” lagoon city with tourists and locals alike, parading in costumes and masks for a traditional celebration dating back to the 12th century. Masks have served a historical role in the Carnival as they were previously meant to disguise any visible differences between class, gender or religion.

The signature look, a white mask with a black outline and a pointy three-cornered hat, is a sight hard to miss, as you are endlessly surrounded by the vibrancy of such custom-made attire. Taking place during the 40-day Lent season, this extraordinary festival celebrates food, drink and joy across 53 official events throughout the streets, plazas and palaces hosting extravagant masquerades. Don’t be surprised to find events happening in the main waterways as well. Crowds gather everywhere, especially on Shrove Tuesday, the last and highly anticipated day of the Roman Catholic fest when thousands of tourists come together annually.

The atmosphere of the Carnival takes you back in time as you stroll across St. Mark’s Square, the epicentre of all Carnival festivities. Participate in the best costume competition where entrants are awarded prizes in different categories from the best-of-the-day costume to the ultimate grand finale winner. See the “Flight of the Angel”, where a beauty pageant winner rides a zip wire from the San Marco bell tower to the middle of Piazza San Marco in honour of the 13th century Serenissima tradition when an anonymous visitor to Venice paid respects to the Doge — the chief magistrate — with an embrace. Head towards the Gallery of Wonders in Ca’ Vendramin Calergi for an enchanting dinner show and masquerade ball.

The Scuola Grande di San Teodoro, one of the seven “Scuole Grande” founded in 1258 in Venice, presents the orchestra I Musici Veneziani who offer several performances throughout the carnival. Absorb classic opera arias that conjure up the opulent Baroque atmosphere with the orchestra and singers dressed in 18th century Venetian costumes.

See the Musica in Maschera perform Vivaldi’s Four Seasons and other Italian classics in historical garments at the Scuola Grande Dei Carmini. Dine first at the Trattoria Ai Carmini next door and experience the masterworks of Vivaldi in the heart of Venice with an interpretive ballet performance to complement the evening.

The Palazzo Barbarigo Minotto offers various immersive opera interpretations with the cultural association Musica a Palazzo. One of the most frequently performed operas here is Giuseppe Verdi’s La Traviata. In this interactive performance, the first act has the audience sitting in the Portego (central hall) as Violetta’s guests. Violetta and Alfredo are introduced here and fall in love. Then the second act moves to the Sala Tiepolo to emphasize the intimate conversations of the characters. The final scenes conclude in the Camera da letto (bedroom with alcove) where the drama escalates surrounding Violetta’s illness and death. Experience a performance of a lifetime during Carnival with a glass of wine, facing the Grand Canal.

Verdi’s Rigoletto also regularly fills the halls of the Palace with an unforgettable story. The opera unfolds in three acts laden with passion, betrayal, love and tragedy. Witness the magic of Verdi come to life where 18th-century costumes blend in perfectly with the Baroque design of the Palace. Candlelit scenes throughout the Palace halls highlight the Caravaggio paintings and draw you into a magical masterpiece with the backdrop of the Grand Canal. Enjoy a glass of Prosecco and see this historical opera as it was first performed in 1851.