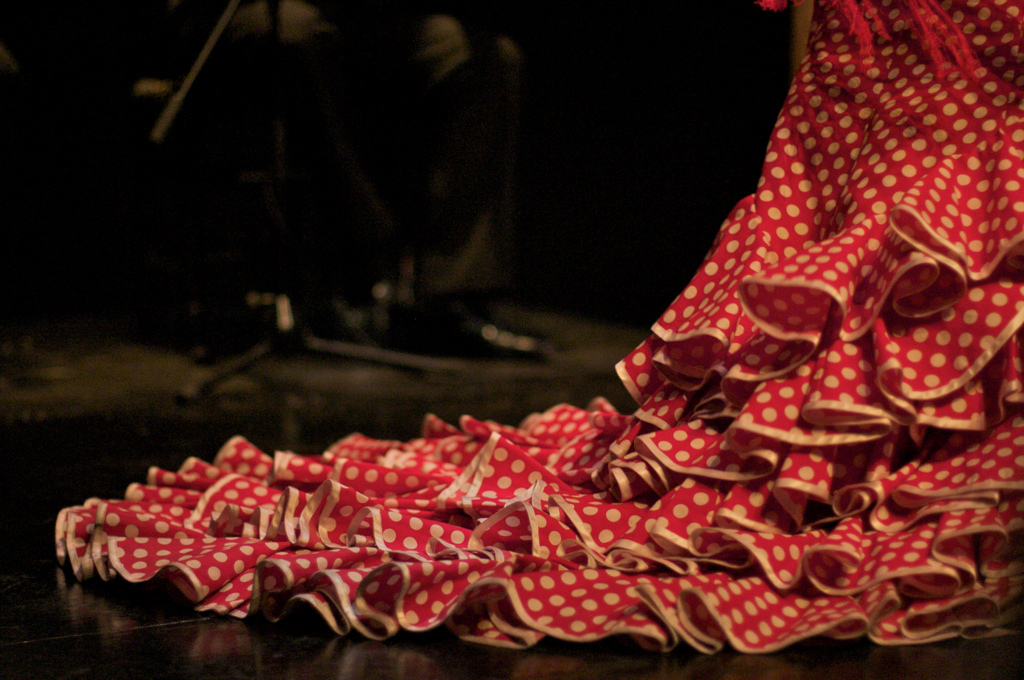 The Living Tradition of Flamenco

Fiery music, crashing heels, swishing skirts… Flamenco tradition is known for its unmitigated passion and energy. The origins of flamenco dance and music can be found in Andalucia in southern Spain, where immigrants from northern India arrived during the Middle Ages. The culture of these Romani, or Gitano people, as they came to be known, mingled with Jewish, Muslim, Catholic, and other local influences. With the interaction of languages, clothing, foods came also the meeting of music and dance tradition. The art of flamenco was one of the lasting results.

The term “flamenco” only came into use in the 18th century, and the origins of the word in this context are not entirely clear. An extensive vocabulary and categorization developed around the art form, describing dozens of different stylistic modes, called “palos”. These indicate the way the music is put together, where the form comes from, and how it is intended to be performed. There are palos for unaccompanied voice, palos with guitar, palos to be danced, and others without dance. The basic elements of flamenco are “cante”, meaning song, “baile”, or dance, and “toque”, which is the instrumental music. Flamenco vocalists typically remain seated while singing simple, but highly expressive and emotional lyrics. Flamenco dance is not only seen, but also heard. Dancers stomp their heels on a hard dance floor, emphasizing the rhythm of the music. Raised and gesturing arms extend from a haughty posture. Hands are clapped, and often castanets are played.

Flamenco came into being within the context of private, religious, or community events. The skills and traditions have been passed down through families and community organizations. In 2010, UNESCO added flamenco to the list of Intangible Cultural Heritage of Humanity. More recently, interest in flamenco spread well beyond the realm of private celebrations. Not only in Spain, but in many countries around the globe, people have been fascinated by and drawn to flamenco dance and music. Schools, institutes, and dance companies were established, and a wide variety of performance formats sprang up to accommodate enthusiasts.

View of the City of Seville, Spain

The living tradition of flamenco music and dance in Spain draws both local audiences and visitors from around the world. Flamenco events range from intimate guitar evenings to large-scale stage spectacles.  Andalusia is the birthplace of flamenco tradition, and the region’s historic cities offer ample opportunity to experience flamenco live. Seville is often considered the capital of authentic flamenco. Here, audiences can find flamenco performances in evocative and intimate locations. The dance floor is barely removed from the audience, giving the feeling of an authentic musical evening among friends and family. Meanwhile, at the Seville Opera House, or Teatro de la Maestranza, some of Spain’s leading artists of flamenco song, guitar, and dance carry on the more classical tradition of flamenco.

Visitors to Granada also find a wealth of flamenco events. After a day of exploring the UNESCO World Heritage Sites of the Alhambra and Generalife Gardens, travelers can dedicate an evening to the “Intangible Cultural Heritage” of flamenco in Granada. Further north, Barcelona boasts a variety of flamenco.