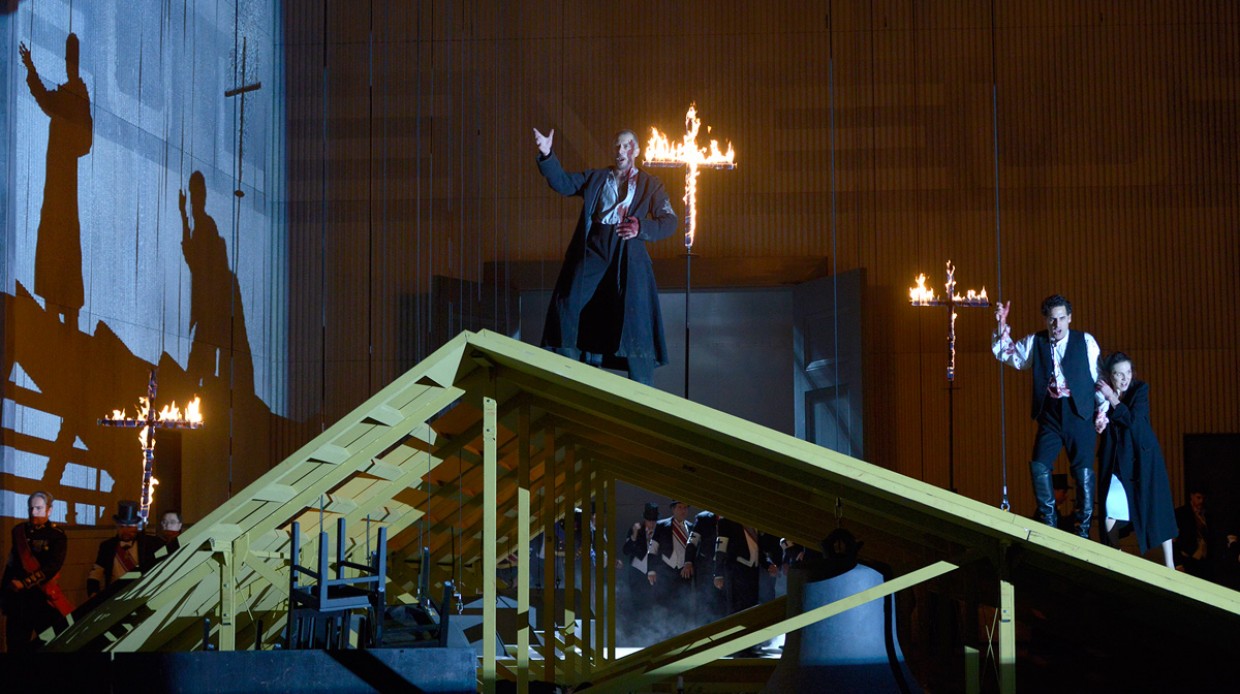 Moving love stories set against the backdrop of major historical events – such was the formula that made grand opéra the central art form of the 19th century. And no work of opera better exemplifies this recipe for success than Giacomo Meyerbeer’s Les Huguenots, first performed in Paris in 1836.

Meyerbeer’s opera depicts one of the major massacres in European history, a tragic display of religious fanaticism: On St Bartholomew’s Day in 1572, French Catholics attempted to eliminate all of the country’s Protestants. Meyerbeer’s work follows the developments that lead to the slaughter of the Huguenots, and at the same time, he links the conflict to the doomed love story of Raoul and Valentine.

For nigh on a century Meyerbeer’s work remained one of the most frequently performed operas, with entire generations watching as blind religious fanaticism seals the fate of the young protagonists: Valentine, a Catholic, and Raoul, a Huguenot. In its linking of the fate of the two lovers with the major historical event, Les Huguenots became the archetypal work of the new grand opéra sub-genre and one of the most influential operas in history.

Yet the global hit that Les Huguenots has become can also be attributed to Meyerbeer’s music, which skilfully juxtaposed mass scenes such as the famous “Blessing of the Swords” with great arias and duets and set new standards in dramatic bel canto roles for soloists. The musical quality of Meyerbeer’s body of work and the central themes in his operas, religious fanaticism, has recently gained currency as a focus of attention for artists

Following on the heels of last season’s Vasco Da Gama production, Les Huguenots is the central work in the Deutsche Oper’s Meyerbeer cycle, which presents new theatrical productions of the key works of Berlin’s greatest ever composer. The aim of this unique project is to re-ignite a discussion surrounding the works of one of the key operatic composers of the 19th century, which have long featured only as curiosities on opera houses’ programmes.

At the Deutsche Oper Berlin audiences now have an opportunity to rediscover this masterpiece. The new and opulent production by David Alden, one of the highest-profile directors working today, and who has already triumphed at the Deutsche Oper Berlin with Benjamin Britten’s Peter Grimes and Billy Budd, features Peruvian star tenor Juan Diego Flórez in his debut as Raoul alongside Olesya Golovneva as Valentine and Patrizia Ciofi as Marguerite de Valois. The conductor will be Michele Mariotti, who recently garnered plaudits from critics and audiences alike at the 2016 Rossini Festival in Pesaro.