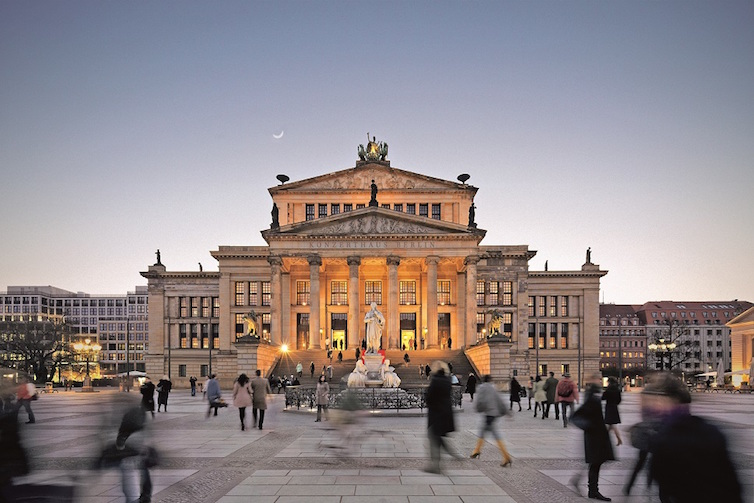 Behind the grand proportions and Neo-Classical façade of the Konzerthaus Berlin, there lies a lively musical dialogue between old and new. The towering landmark on the elegant Gendarmemarkt square represents a mix of historic foundations and postwar restorations that is typical for the reunified German capital. And just as the concert hall has had to reinvent itself over the years, the programming at the Konzerthaus Berlin maintains a fresh and forward-looking approach, without losing sight of the historic foundations of the classical music repertoire.

From the emotionally charged clarity of Händel arias to the rapture of Beethoven’s symphonies, autumn at the Konzerthaus Berlin offers a range of fall colors from warm to red hot.

With his exploration of Beethoven’s symphonies, Chief Conductor Iván Fischer promises an exciting journey. The musical expedition begins in October with the Second and Third Symphonies packed into one program. If Baroque is more your style, there is perhaps no better German ensemble than the Akademie für Alte Musik Berlin. Tenor Julian Prégardien joins the renowned group for excerpts from Händel’s oratorios. At the end of the month, take a step beyond the boundaries of classical music, with fiery music from the Balkans, with Goran Bregović.

If you haven’t experienced the most famous boys’ choir in Germany, the Dresdner Kreuzchor’s 800th anniversary is the right time, and Brahms’ German Requiem is the right work. This year’s artist in residence, Patricia Kopatchinskaja, has her first Konzerthaus appearance of the season in November, performing Schumann with the Konzerthausorchester and Iván Fischer, who also continues his series of Beethoven symphonies in this concert.

Above and Beyond: Konzerthaus Berlin Special Programming

One of this season’s special events is the Schubert Marathon taking place on November 20th. From 12 noon until 10 pm, the Konzerthaus will focus on Franz Schubert, with symphonic performances, chamber music, choral concerts, recitals, and family events. Artists include the Vienna Boys’ Choir, pianist Arcadi Volodos, tenor Christoph Prégardien, and of course, the Konzerthausorchester Berlin with Chief Conductor Iván Fischer.

You have tears in your eyes, but nevertheless, through the tears, there is also a smile within. That paradox is the beauty of Schubert

Music Inside Out: Mittendrin

The Konzerthausorchester goes a step further in bringing the music close to its audience with the Mittendrin concert series. The name of the series translates as “Right in the Middle”, and in four performances throughout the season, the audience is invited to sit among the orchestra musicians while they perform a major symphonic work. Listeners discover the individual sonorities and the interaction among the instruments from a perspective normally reserved for professional musicians. In November, Iván Fischer conducts Beethoven’s Fourth Symphony for the first Mittendrin concert of the season. The January event features Mahler’s “Resurrection” Symphony, and contemporary music aficionados can look forward to Philip Glass and John Adams in February. The final Mittendrin performance in June features artist in residence Patricia Kopatchinskaja playing Sibelius’ Violin Concerto.

Within the orchestra, the music is so alive and full of different things happening. I thought, for once, the audience should have that experience, to hear the orchestra from within