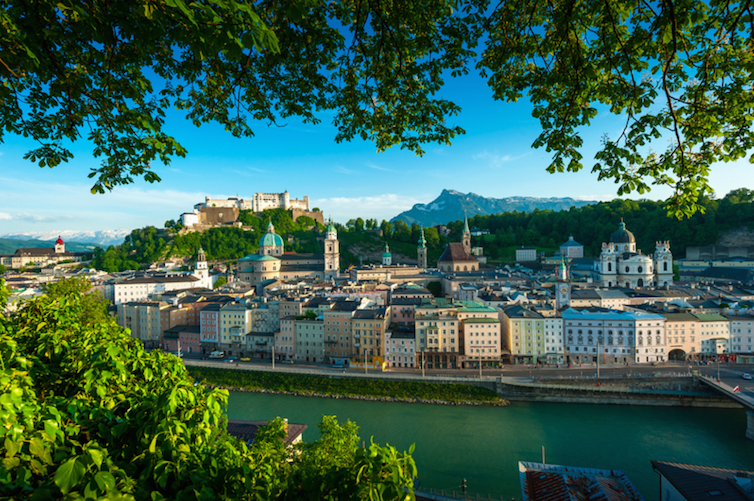 Salzburg is known by music-lovers as the birthplace of Mozart and, more recently, the setting for the film “The Sound of Music”. Situated on the Salzach River between scenic plains to the North, and rugged mountains to the South, Salzburg outdoors is every bit as breathtaking as its cultural and musical offerings. Visitors more inclined to physical activity or appreciation of nature will find plenty of things to do in Salzburg during the day, including hiking, skiing, biking, and swimming, depending on the season, and in the evening enjoy a classical concert in location steeped in history.

Gateway to the Alps

In the winter months, Salzburg presents a unique opportunity for a ski vacation. The closest alpine peak is Untersberg. Cable cars in St. Leonhard/Grödig transport skiers up the mountain, offering visitors a stunning view of Salzburg and the surrounding Alps before they ski down prepared slopes leading back down to Fürstenbrunn. Cross-country ski trails wend their way near the city of Hellbrunn and on Gaisberg to the east. And for more intrepid souls, Gaisberg offers high-speed downhill skiing through unprepared areas. In the spring and summer months, these same areas become scenic routes for hiking and biking—and from atop Gaisberg, even paragliding.

The Hills are Alive…

Closer to city center, visitors can enjoy more local sports activities and nature escapes on smaller city mountains:
A short but steep climb up the Festungsberg brings visitors to the doorstep of the Hohensalzburg Schloss (also accessible by cable car) Originally built in 1077, and then expanded between 1495 and 1519, the Festung Hohensalzburg is one of the largest and best preserved medieval fortresses in Europe. The interior features rich ornamentation, intricate Gothic woodcarvings, and decorative paintings. Bask in the historical ambiance with dinner and concert in the Golden Hall.

Visit Mönchsberg for hiking and panoramic views of the city. Partake in rope-climbing routes on Kapuzinerberg. The gardens at Schloss Mirabell offer an idyllic setting for jogging or a relaxing stroll with its mythological statues. Visitors on the Salzburg Sound of Music Tour will recognize the Pegasus Fountain from the film’s dancing scene with Maria and the children. The palace itself was built in 1606 by Prince-Archbishop Wolf Dietrich Raitenau and named for his mistress. Only a few years later, Raitenau was deposed and arrested and the palace was renamed Mirabell. Following a devastating fire in 1818, the palace was rebuilt in its current Neoclassical style. The exquisite Marble Hall, in which Mozart himself performed centuries ago, was renovated in 1954, providing the perfect surroundings and acoustics for weddings and classical concerts. Today the Marble Hall is the setting for performances by world-renowned artists and ensembles.

On the opposite side of the Salzach River again, the Alte Residenz stands, the embodiment of power and grandeur. It gets its early Baroque style from Archbishop Raitenau, with later expansions in the 17th and 18th centuries. The centuries-long residence for the Archbishops of Salzburg is an expansive museum today, featuring a collection of European art and artifacts from the 16th to 19th centuries. For a real treat, stay for a Salzburg Palace classical concert. Mozart premiered his Violin Concerto No. 5 in A major, K. 219 here—what better way to invoke the composer’s presence than with a concert in the magnificent chambers which he knew well?