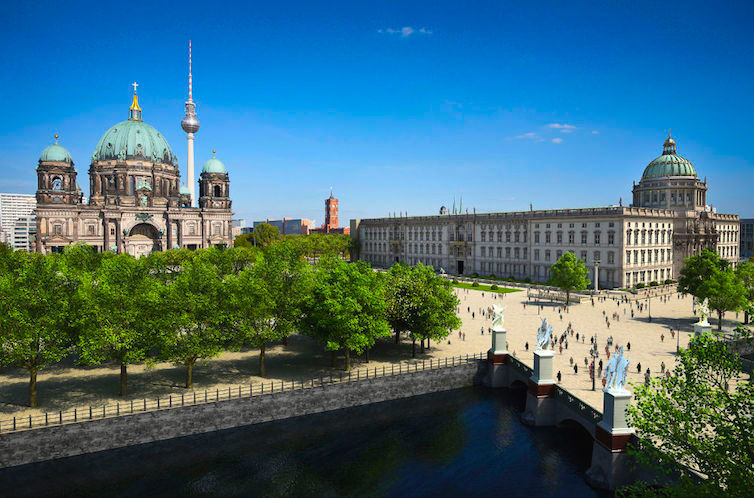 Unexpected Palaces of Berlin and Potsdam

Although Berlin is much more famous for its more recent past and present, the city and its immediate surroundings are still home to a number of significant historic palaces which hearken back to the Renaissance, Baroque and Rococo periods and the old grandeur of the Hohenzollern family and the Prussian Kingdom.

The Berliner Stadtschloss stands at a fascinating intersection of past, present, and future. This former royal and imperial palace was located on Museum Island in the heart of Berlin. Originally built for the prince-electors in the 15th century, each subsequent ruler made additions and changes. The East German government demolished the remains of the heavily war-damaged palace in 1950, subsequently building on the site the ill-fated asbestos-ridden Palast der Republik, which managed to stand for several decades before also being torn down (approximately 35,000 metric tons of its steel was later shipped to the UAE to be used in the construction of the Burj Khalifa). In 2013, new construction began on the site to recreate the Stadtschloss exterior according to original architectural plans, although the project has been met with a mixture of criticism as well as support. Estimated to be completed in 2019, when the Berliner Stadtschloss re-opens, it will be home to the Humboldt Forum, a center for world culture and learning.

A lovely example of Baroque sensibilities, the Orangerie of Charlottenburg Palace quickly evolved beyond its original function, the overwintering of prized citrus and orange trees, into a splendid venue for festivities. This tradition continues on today in the form of cultural events, gala dinners and classical concerts where visitors can experience a taste of Prussian pomp and ceremony in an intimate, historic setting.

A scenic Baroque water palace seated on a small island in the Dahme River and enclosed by a verdant English-style park, Köpenick Palace has been through several incarnations over the centuries—first as a 16th century hunting lodge built on the foundations of a 6th century Slavic castle, then as a 17th century palace and residence of Frederick I of Prussia, and finally today as an exhibition space for the Kunstgewerbemuseum, the Museum of Decorative Arts. Guests are invited to explore the rich interior of the palace and its exhibits from beautifully worked furniture to impressive stucco ceilings. Combine a palace tour with a concert and dinner to make the most of your visit.

The Zitadelle Spandau sits atop an island created by the confluence of the Havel and the Spree, perfectly poised to defend the town of Spandau, Berlin’s westernmost district. One of Europe’s most important Renaissance military structures, the fortress is well-maintained despite its somewhat grim history. The site is a popular venue for large-scale exhibitions and open-air concerts, both classical and otherwise. And no visit to the Zitadelle is complete without a climb up the old watchtower, the famous Juliusturm, with its spectacular view of Spandau.

Though smaller than Versailles, this former summer residence of Frederick the Great is hardly less impressive with its opulent yet whimsical Rococo style. The name Sanssouci comes from the French phrase “san souci”, meaning “without concerns”, which perfectly describes the lightness and playfulness this palace, with its extensive gardens, seeks to embody. Today a UNESCO World Heritage Site, it’s easy to see why “Old Fritz” fell in love with this place. The grave of Frederick the Great overlooks the exquisite gardens, and local visitors still place potatoes on his tombstone as a symbol of respect for the beloved monarch.