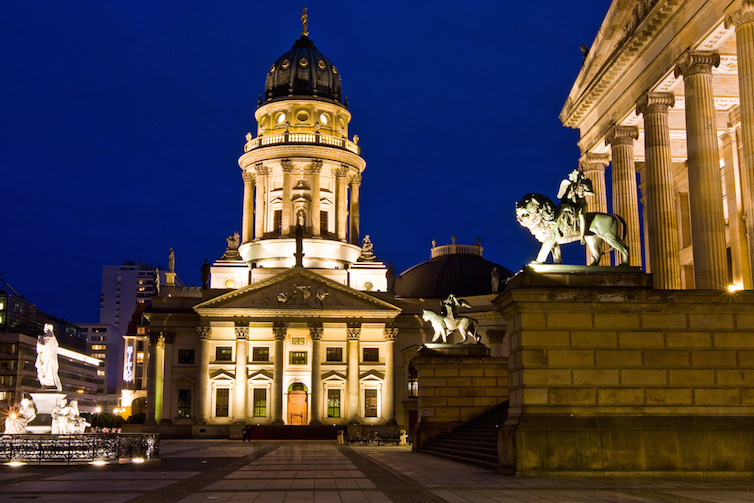 In the three decades following the WWII destruction of all of its main musical venues, the city of Berlin focused on the reconstruction and restoration of these important cultural centers. In some cases, you see faithful reproductions of past architecture, while in others you see striking modernist departures. Once thing remains consistent: Berlin is a cultural city with a valuable music tradition.

The original 1912 concert hall at Bernburgerstraße was completely destroyed in 1944. The new building, located just a stone’s throw from Potsdamer Platz, occupies a central position in Berlin’s Kulturforum. Built between 1960 and 1963, the building’s unusual construction, with its striking asymmetrical yet organic lines, is the modernist design of Hans Scharoun. With two halls, the new Berliner Philharmonie hosts a wide variety of music, from classical music concerts to chamber music to jazz and traditional music. The pentagon-shaped main concert hall offers up progressive 360-degree seating relative to the centrally-located stage, a design which has become a model for other high profile concert halls. The layout ensures outstanding acoustics regardless of where you are sitting.

This 19th century former theater was rebuilt between 1977 and 1984 and initially reopened as a concert hall for the Berliner Sinfonie-Orchester. The building’s dramatic exterior is a faithful reconstruction of the original design by Karl Friedrich Schinkel, while the interior, housing three halls, has been adapted in a sumptuous Neoclassical style, complete with pillared halls, grandiose chandeliers and gilded ornamental details. Now home to the Konzerthausorchester Berlin, the Konzerthaus is a truly dream-like location for classical concerts, sacred vocal music, and even jazz performances, offering superior sound and excellent sightlines. Take advantage of its central location near the historical Gendarmenmarkt and enjoy a glass of champagne at a nearby café before the concert.

The Berliner Staatsoper is a grand building in the classical style well-situated in the architectural landscape on Unter den Linden, Berlin’s historical center. Originally built in 1742 at the commission of King Frederick II of Prussia, the Staatsoper was one of the oldest in Europe and the first opera house in Berlin. Following its destruction during WWII, it was lavishly rebuilt in 1955 according to original plans. While the building is currently undergoing extensive renovations, including acoustic improvements and building of a new rehearsal center, the Staatsoper continues its opera program in its temporary location, the more intimate Schiller Theater.

Originally the setting for 19th century light opera, events and balls, the Komische Oper Berlin incurred damage during WWII when bombs destroyed the building façade, entrance hall, and ceiling paintings. The auditorium, however, was miraculously spared. The following decades saw several waves of progressive renovations and extensions, leading to the building you can see today, consisting of a sleek, modern exterior, and stylishly atmospheric interior. Voted the 2007 “Opera House of the Year”, the Komische Oper specializes in German language productions of opera, operetta, and musicals. Here you can expect to encounter solid performances and creative staging, often combining real scenery with projections—a great place for young people, and opera newcomers. The house also boasts an impressive subtitling module built into the back of every seat.

In contrast to the pomp and splendor of the opera houses in the eastern part of the city, the Deutsche Oper, located in the western neighborhood of Charlottenburg, is a sober minimalist construction. The original 1912 building was an example of Bürgeroper, an opera house built by the citizens of Charlottenburg and for citizens of Charlottenburg, in which the stage and the music were the focus with clear sightlines from every seat. Destroyed in a 1943 air raid, it was replaced by a new opera house built in the same location but in a modern style. The Deutsche Oper Berlin reopened in 1961 very shortly following the raising of the Berlin Wall, separating it from the other two opera houses in East Berlin. The second largest opera house in Germany, the Deutsche Oper is praised for its simple elegance, open layout, and superior acoustics.