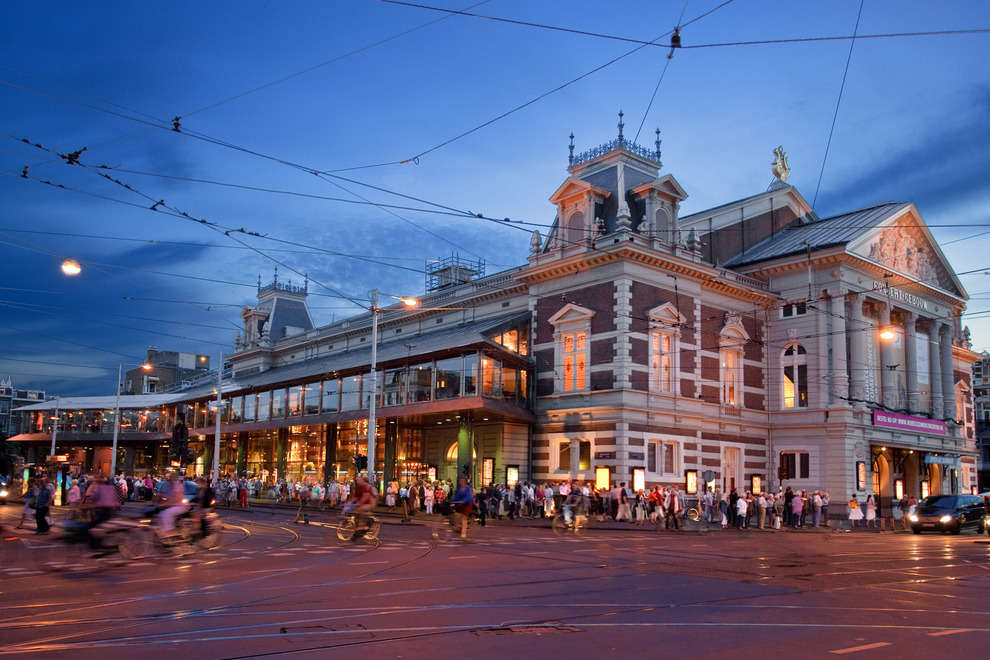 Behind the Scenes at Amsterdam’s Royal Concertgebouw

Once upon a time, concert houses were elite institutions for the privileged few, and the word “royal” was an extra reminder that common folk should keep their distance. The Royal Concertgebouw brought a happy end to that fairy tale, at least for the city of Amsterdam.

When the Koninklijk Concertgebouw (“Royal Concert Building”) opened in 1888, it stood practically alone on a typically watery plot of land on the outskirts of Amsterdam. The next closest building was the Rijksmuseum, the Dutch answer to the Louvre, which opened just a few years earlier. Today, the Concertgebouw is in the heart of a busy neighborhood with numerous cultural institutions, and it is seamlessly integrated into the city’s fabric.

A Day in the Life of the Concertgebouw

On a recent Sunday, no less than five concerts were planned at the Concertgebouw, in addition to the usual Sunday backstage tour and the regular business of the popular Concertgebouw Café.

The 11 am concert, featuring Anna Federova playing Rachmaninoff, belonged to a Sunday morning series that is co-presented by a Dutch media company. The concerts in the series are recorded and broadcast live on radio. The concert’s sponsor, Menzis, is a health insurance company, and one of the conditions of its support is that concerts are made available through live-streaming, so that people who are too ill to come to the hall can enjoy the event.

Meanwhile, the Recital Hall geared up for a piano four hands concert. With about 450 seats, the acoustics of the smaller hall are ideally suited for chamber music. Later, the Main Hall stage was rearranged and the piano prepared for Jean-Yves Thibaudet’s evening solo performance.

Unlike many of Europe’s great classical music institutions, the Concertgebouw has depended primarily on private funding since it was built. Government subsidies only cover about 5% of the budget, and ironically, that might be one key to the house’s success. Driven by the need to stay commercially viable, the Concertgebouw is a well-oiled production machine, able to present multiple events on a single day, and catering (sometimes literally) to a diverse audience.

About 700 concerts are offered in the Concertgebouw each year. But that is not all. In order to ensure the financial security of this world-class concert house, about 300 commercial events are booked here each year as well, of which about 30 are dinners served in the concert hall itself. With the Royal Concertgebouw Orchestra rehearsing in the hall daily from 9:30 am until 2 pm (when it is not touring away from home), that poses quite an organizational challenge.

Whether it’s a gala dinner, a fashion show, or a party, most commercial events in the Main Hall require removing the 2000 chairs from the audience area, a job that takes 10 people about three hours. The technical team can only begin removing the normal concert seating after the evening performance the night before. Typically, that means beginning the move around 11pm and finishing at two in the morning, only to begin set-up for the event itself around 6 am the next day.

The chairs are temporarily stored in the Concertgebouw’s relatively new basement. The subterranean level was created in the 1980s during renovations undertaken primarily to keep the concert hall from sinking into the soggy earth around it. Before then, the Concertgebouw had no storage space and practically no changing rooms for the musicians, who were frequently found slipping into their tails in the hallways around the hall.

When the hall is chair-less, a special curtain is hung to simulate the acoustic properties of the chairs, so that the orchestra can rehearse in optimal conditions. The Concertgebouw Orchestra finishes rehearsing at 2pm each day, and then the technicians can continue their set-up in the Main Hall. Meanwhile, they might be at work in the elaborate rigging above the stage, which allows for elaborate lighting, decoration, or sound installation. The Floor Manager keeps a schedule of the comings and goings of technicians, musicians, caterers, deliveries, and guests. If anything fails to appear on that plan, the consequences for the evening event can be catastrophic.

The forward-looking team behind the Concertgebouw is careful not to settle too comfortably into established ways. A simple example strikes visitors from out of town as soon as intermission begins. Filing into the attractive glassed-in foyer, one immediately senses that something is missing: the endless lines at the bars. After a very brief wait, the reason becomes evident: At the Concertgebouw, beverages during intermission are free. The Marketing department here found a very simple solution to a very old problem. When the bartenders do not have to spend their time making change, they easily manage to serve quickly and keep the line moving. Food still has price tags, but coffee, tea, alcoholic beverages, juice, water, and cookies are all free for the taking, covered by a nominal amount added to the price of each ticket. Concert-goers feel pampered, and the staff’s load is lightened.

This season, the Concertgebouw has introduced a composer-in-residence program. Each year, an internationally recognized composer will be invited to Amsterdam to compose under the inspiring influence of the city. Chinese-American composer Huang Ruo is the invited guest this season, and his work will be premiered at the Concertgebouw in March 2017.