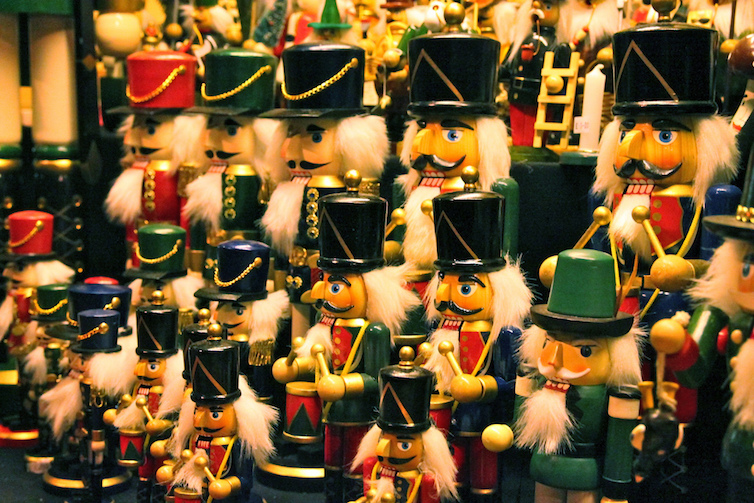 The Nutcracker Guide: Christmas in the Land of Sweets

Come Christmastime, parents around the world dutifully bring their kids to see “The Nutcracker”, and later entertain their newly-ignited dreams of ballerina stardom. “The Nutcracker” is one of the most popular ballets, particularly during the holiday season—in major US ballet companies, approximately 40% of annual ticket sales are from “The Nutcracker”. Tchaikovsky’s score is one of the composer’s most famous and beloved works.

The story of “The Nutcracker” comes from both E.T.A. Hoffman’s 1816 book “The Nutcracker and the Mouse King”, and Alexander Dumas’ lighter 1847 reworking, which softened a lot of the darker themes of the original. In both versions the plot is essentially the same: a German girl (named Clara in some versions, and Marie in others) dreams that her toy Nutcracker comes to life, and after a fearsome battle with the evil Mouse King, Clara and the Nutcracker Prince are whisked away to a magical kingdom, where they are greeted by the Sugar Plum Fairy. In celebration of their bravery, the two heroes are presented with a series of dances, including the Spanish dance (chocolate), the Arabian dance (coffee), the Chinese dance (tea), the Russian dance (candy canes), and the lovely “Waltz of the Flowers”.

The ballet was met with a lukewarm reception at its 1892 St. Petersburg premiere. The production was the second part of a double bill alongside Tchaikovsky’s final opera “Iolanta”, which meant that the ballet didn’t finish until shortly after midnight. No doubt over-tired critics and audience members had something to do with the negative reviews. Other points under criticism included the casting of “children” (students of the Imperial Ballet School in St. Petersburg) in prominent roles, the over-simplification of the original Hoffman story and the choreography itself. Subsequent productions of the ballet (including those by Alexander Gorsky in 1919, Vasili Vainonen in 1934, and George Balanchine in 1954) sought to address and improve some of these points.
It took more than 40 years before “The Nutcracker” was performed outside of Russia, premiering in England in 1934. The full-length production arrived in the US ten years later, debuting on the West Coast in 1944 with the San Francisco Ballet and then on the East Coast in New York in 1954. By the 1960’s the ballet had been embraced by the rest of the US as a must-see during the holiday season.

How long is The Nutcracker ballet?

Tchaikovsky himself was less than satisfied with the music, believing it to be far inferior to his previous work, “The Sleeping Beauty”. He had a difficult time working on the score, suffering frequent interruptions, while choreographer Marius Petipa’s composition guidelines allegedly stifled the composer’s creativity. Tchaikovsky found room for innovation despite this limitation, using the celesta, the magical bell-like instrument heard in the Dance of the Sugar Plum Fairy. The composer fell in love with the instrument in Paris.
Tragically, Tchaikovsky was never to realize the enduring success that “The Nutcracker” would later become, as he died less than a year after the premiere at age 53.