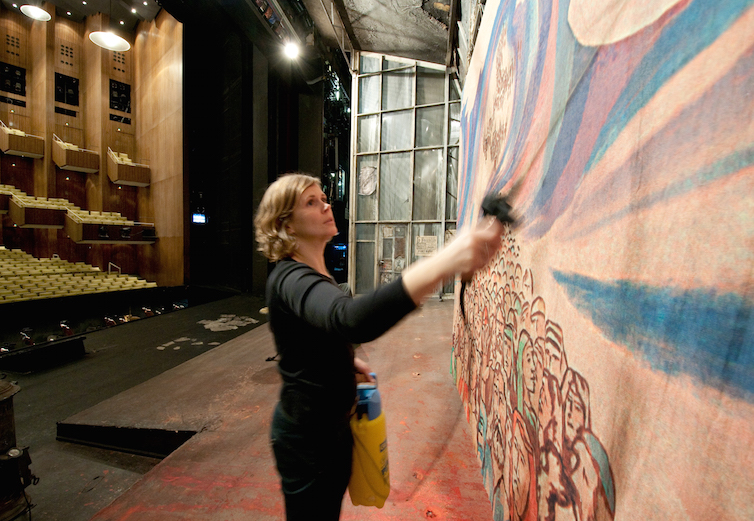 A Day in the Life of Deutsche Oper Berlin

The Deutsche Oper Berlin is the biggest opera house in the German capital city, with almost daily opera performances, and hundreds of artists, technicians, and staff. We invite you to join us as we step inside a typical day from morning to night at this Berlin opera institution, and appreciate the grand coordination that goes into the running of a successful opera house.

In mid-September of 2015, “Vasco da Gama” is the focus of the house. A grand opera in five acts by Giacomo Meyerbeer, it tells a fictitious account of events in the life of historical Portuguese explorer Vasco da Gama, sung by French star-tenor Roberto Alagna. The opera premieres at the Deutsche Oper Berlin on October 4 under the direction of Vera Nemirova and the baton of Conductor Enrique Mazzola. With a length of five hours, including two intermissions, “Vasco da Gama” is a proper Wagner-sized opera, and thus requires more in the way of both musical rehearsals and technical planning.

The Day Begins, the Stage is Set

At 6:45 am the technicians have already started work preparing the set for the morning rehearsal. The chorus and soloists have been training on stage with partial scenery, which means in some cases marked scenery just to know where everything is. Yesterday they were rehearsing until 10pm with the same. Accompanied today by a pianist seated in the orchestra pit, this will be one of the last rehearsals without the orchestra.

The current stage scenery consists of a number of large arching sail-like constructions on wooden frames arranged in a semi-circle around the stage. The sails can be drawn up or down, and yesterday there was a problem with this mechanism. Troubleshooting is a big part of rehearsal. The white outlines of Europe, Africa, and the East Indies can be seen on a wooden half-moon platform that rises up from the middle of the stage floor. This motorized platform can be opened to stand vertically, like a flap in the stage floor, and windows slide open near the bottom.

The technicians have set up Act 1, the “Council Chamber” scene on the main stage, with a planned set change at 11:50, Act 3 the beginning of “the Wedding”.

This morning’s stage rehearsal finds the soloists and men’s chorus gathered around the half-moon stage, which is in a level position. The chorus is dressed in street clothes, while the soloists are wearing basic costume pieces like hats and overcoats, or carrying props like maps or crucifixes. Both the director and the conductor utter stage and music direction via microphone. Acting is more of the focus at this time. Nemirova tells them to stop, has two singers exchange places, asks one of the soloists to step up onto the edge of the raised stage and gesture as he sings. The pianist starts the ensemble off again and they repeat the scene with the changes. At the next cut-off Nemirova advises more to the emotional reaction and struggle between two characters.

The technicians stand by to convert the set to Act 3, beginning of the Wedding, in which the women’s chorus will join. Acts 1 and 3 corrections will follow at 1:00 for soloists and other performers.

Meanwhile, as the chorus and soloists are rehearsing on the stage with Mazzola, the orchestra is rehearsing with the Kapellmeister in the enormous practice hall, a space more than large enough to accommodate a Wagner-sized ensemble like this 80-person orchestra. There is actually potential for the entire orchestra, chorus, and soloists to rehearse together in this space. This morning they are mostly doing run-throughs. There is very little stopping for commentary. Starting next week the orchestra will will join the chorus for rehearsals on the main stage.

Mazzola, who will rejoin the orchestra rehearsal at 1:30 pm, has been working with the musicians since the middle of August, as “Vasco da Gama” is an opera which is not often performed and thus not likely to already be in the musicians’ repertoire.

At the same time other ensembles and individuals are busy rehearsing elsewhere for other productions.

In the Tischlerei they are busying themselves with a children’s production of “The Wanderings of Odysseus”, including music rehearsal, lighting, piano, and sound.

The Deutsche Oper Berlin also has a number of practice stages. “Vasco da Gama” moved its rehearsals to the main stage as the premiere neared. Prior to that, starting August 18, they had been rehearsing in one of these secondary practice spaces. Recognizable are the basic forms of the sails and the raised half-moon stage, reminiscent of their main stage counterparts, but lacking in the more evolved moving mechanisms. Typically a production will use temporary structures like these for approximately three weeks, and they are kept available up until one week before the premiere in case parts of the ensemble need to come back here to rehearse.

More individualized practice is possible in four smaller chambers. In Zimmer 1 soprano Nino Machaidze, who sings Ines in “Vasco da Gama”, is rehearsing with a pianist at 5:30 pm, while in Zimmers 2-4 time-slots are reserved for individuals preparing for productions like “Barber of Seville”, “The Magic Flute”, “Don Giovanni”, and “The Marriage of Figaro”.

During the early afternoon the costume department is servicing actors from upcoming productions like “The Magic Flute”, “Lucia di Lammermoor”, “Nabucco”, and “Don Giovanni”.

Mezzo-soprano Sophie Koch, singing the role of Selica in “Vasco da Gama”, is visiting here for partial costume. At 6:30 pm she will have her hair made into the character’s signature braid in preparation for the Act 3 rehearsal.

Early incarnations, or working versions, of the costumes are often used in the early stages of rehearsal. The final costumes for “Vasco da Gama” will make an appearance next Wednesday and Thursday for costume rehearsal. The costume staff will check for fit and function, of which nothing is ever perfect on the first try. This is also the opportunity for the costume designer and the director to get initial impressions—perhaps a color is not right, something is otherwise not as was imagined—in which case, there is still time to make changes if necessary.

The technicians and lighting and sound team will work with the director through the interval while the performers are not rehearsing. During this time they will be focusing solely on technical and logistical details following the set change to the Temple in Act 4.

The technicians will convert the set again to Act 3 “The Wedding” as the singers return for additional rehearsals. This will be a run-through of Act 3 with soloists, chorus, and extras, with other actors cued to enter at 7:10 and at 7:25 pm.